NUS and Internationalism in the 1920s

As part of the ‘British Ex-Service Students and the Rebuilding of Europe project, 1919–1926’ with Northumbria University and UCL, Dr Sarah Hellawell explores the internationalism of NUS in its formative years.

The inaugural meeting of the National Union of Students (NUS) was held in London in February 1922. Its primary object was ‘to represent Past and Present Students from a National and an International point of view, and to render possible the co-operation of the body of students in England, Wales, Scotland and Ireland with the Students of other lands’. Notably, internationalism was a central aspect of the early NUS.

This blog post will explore how the NUS facilitated student co-operation across national borders in the aftermath of the First World War.

In 1919 – shortly after the end of the First World War – the International Confederation of Students (Confédération Internationale des Étudiants; CIE) was established in Strasbourg. British students attended this conference, as well as the second gathering, held in Prague in 1921. 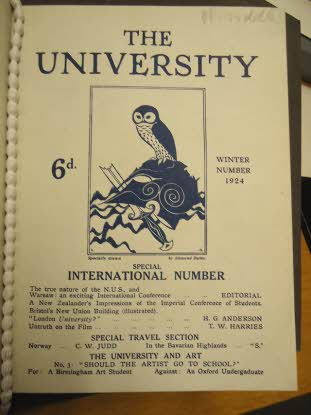 The creation of NUS in 1922 was partly aimed at ensuring the full representation of English and Welsh students within the CIE. Scottish students were represented by a body formed in 1889, and both groups participated in CIE alongside one another in a rare arrangement as the international confederation normally insisted on having only one member organisation per country.

‘The War has left behind it a spirit of narrow and selfish nationalism … It is for the youth of these and other countries to disown this sinister legacy.’ NUS, Facing the Facts (1922), p. 1.

The front-cover of the NUS magazine, The University, depicts the organisation’s belief that knowledge and education could overcome war and conflict. 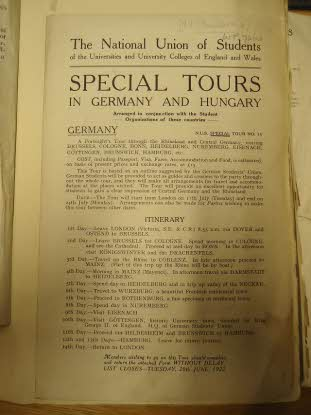 One of the main ways the NUS and CIE promoted international co-operation was through travel and student exchanges. Travel enabled students to ‘acquire first-hand knowledge of the conditions and aspirations of other peoples’ so as to ‘improve the relations between the various nations, and ultimately to assist in the establishment of a stable peace’.
NUS established a Travel Department to organise tours and assist students with passports, visas, tickets and accommodation. In its first year, NUS arranged trips to Germany, France, Switzerland and Italy, as well as tours of the battlefields in Ypres, Vimy Ridge and the Somme.

The Travel Department facilitated study tours, student exchanges and holidays while NUS also organised for students to become pen pals across national borders. In turn, the NUS Hospitality Department arranged tours of the UK for visiting international students, such as an annual party of students from South Africa. The Travel Department sought to bring ‘the educational benefits of travel within reach of almost every student’. Yet, while its fees were lower than those of commercial operators, they still proved too costly for many students.

May Hermes – a student from Bedford College, London – was instrumental to these early NUS travel schemes. She was the NUS Correspondence Exchange Secretary between 1922 and 1923. In 1925, she became Secretary of the Travel Department. In 1931, she gave evidence on the value of student exchange schemes to the League of Nations’ International Committee on Intellectual Co-operation. 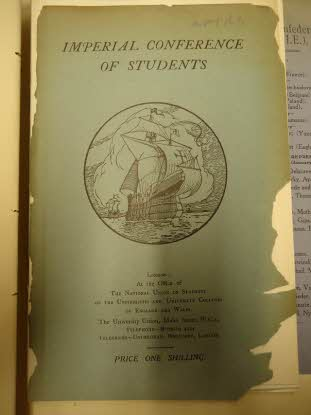 As well as building links with students from former enemy nations, the NUS cultivated links across the British Empire. It encouraged students from the British dominions to form students’ unions and collaborate with the CIE. In July 1924, the NUS hosted an Imperial Conference. Delegates from across the Empire attended the meetings held in London and Cambridge.

For the early NUS, imperial and international loyalties could co-exist – which also meant that the organisation did not initially question empire as such. Notwithstanding such limitations, the organisation had a clear commitment to promoting international co-operation in the aftermath of the First World War.