Following the launch of the Student Safety Net, we have been raising your issues and the campaign demands to decision makers and in the press.

Our next meeting with the Universities Minister, Michelle Donelan, is on June 1st – between now and then we are looking to step our campaigning up a gear. This is a run down of our strategy, with actions we can all take.

Think about your power in this campaign

Each students’ union plays a role in this campaign, and you need to think about where you can be especially influential. All education leaders, especially Vice Chancellors and Principals, have a public profile – but does your institution’s leader have another role in a sector body such as Universities UK, MillionPlus or the Russell Group? Are they generally high profile in the media? Is your MP particularly outspoken, or able to influence the Treasury?

If that is the case, you are well-placed to help win on a national level by convincing your institution’s leader to act and influence others.

In the next two weeks, our strategic priorities are:

If your education leaders have a national profile, it is especially impactful for them to:

Read on for some more ideas on taking action on this!

Changing minds in government: cutting through the noise

To win a national student hardship fund, we need to win the argument with government that students need hardship funding right now. We will present a convincing picture of the need for hardship using information on the current state of hardship funding in the UK and the needs of students. To ensure that everyone can benefit from hardship funding, we need an accessible, uniform approach to accessing funding, designed by all those who will use it.

In England, the government has already acknowledged that current hardship funding is not enough, by releasing £48M from other widening participation sources. In Northern Ireland, the Department for the Economy is promising to double funding for hardship, and in Scotland students have already seen £5m. In Wales, the government expresses sympathy, but says it needs more money from Westminster. 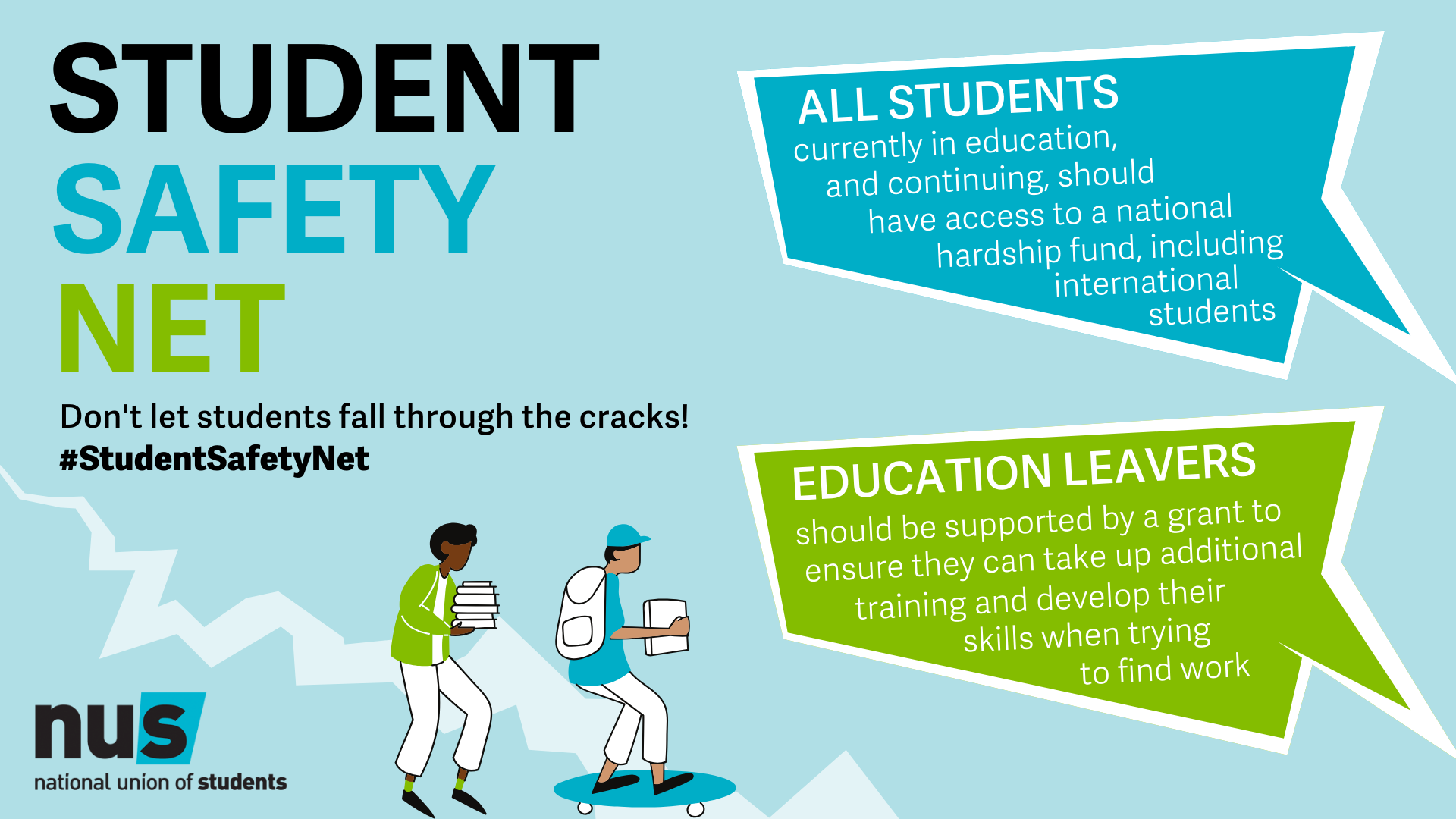 Working on this demand

Five minutes: put in a question to the government

The public is still allowed to ask questions at the Daily Government Press Conferences. Here are our thoughts on things you could ask, but foreground issues you have heard from your own students.

Half an hour: help us build a national picture

We urgently need a better understanding of how hardship funds currently operate at your institution. In our discussions with government and influencers this data is invaluable: if you haven’t already, please send us this information. We will use this to produce a map of the UK for students’ unions to use, to compare their hardship funding to other institutions, and to make the case for new funding in government.

A few hours (or days!): get your education leaders to go public

Lots of you are coming back to us and saying that your Vice Chancellors are sympathetic to lobbying on hardship funding – and maybe even other areas of the campaign. That’s great, and we need them to say that out loud! This will build momentum, and encourage other leaders to do the same.

A few hours: call out for case studies

Gather more local data and case studies on student hardship to support your case locally and nationally. This information can be used for you lobbying, public campaign activity and liaising with local press. This could include:

We would be keen to receive case studies of students in particular hardship or with difficulty accessing hardship funding, to help our work nationally and to bring to our meeting with the Universities Minister.

What comes after this?

A lack of funding is not the only barrier to students receiving hardship support: often the process is a burden, and students are refused access to hardship on arbitrary grounds. We want to convene a discussion on this that leads to national guidance, to ensure that no student is cut out of hardship funding. We have approached Universities UK to begin this discussion and will keep students’ unions informed of what is needed.

Winning on the Education Leavers’ Package has gained traction, with other groups echoing our asks for grants for those finishing their education this year. We’re approaching these groups to build a coalition for this demand, and developing our own policy on it further, led by students’ unions in NUS-USI.

Overall, we believe that the students who are most disrupted by the pandemic are those who are currently unable to access their education because they require on-site facilities or adjustments, have unsuitable working conditions where they are and those who have paused or completed their education early to work in the NHS.

The power to allow a free retake of the year can sit with your university or college, but we still need to win the argument in government that this should be funded centrally.  We will support students’ unions to change the policies of their own providers, while we all lobby for government to allow this to be taken up at no additional cost to the student.

We will amplify the work of students’ unions who have been successful in this ask to show others that it is possible, and we will get national organisations on board. Their backing will increase your power in changing things on the ground and lobbying your education leaders. In further education in particular, we will work with sector representatives to amplify our messages back to colleges and support unions to work on these demands.

Taking on the treasury

The Treasury holds the key to releasing this money, but the idea has to be backed up by the Department for Education and seen as a welcome move by the public.  To do this, we have to build consensus among the public, in Parliament and with national education organisations that this is the right thing to do.

The Minister has said that those who do not believe they have received ‘adequate’ education should be entitled to this, but that they should go through individual complaints processes. We need to help students understand what an adequate education means, and push for a systemic solution, because we believe that collective action will always, ultimately serve us better. 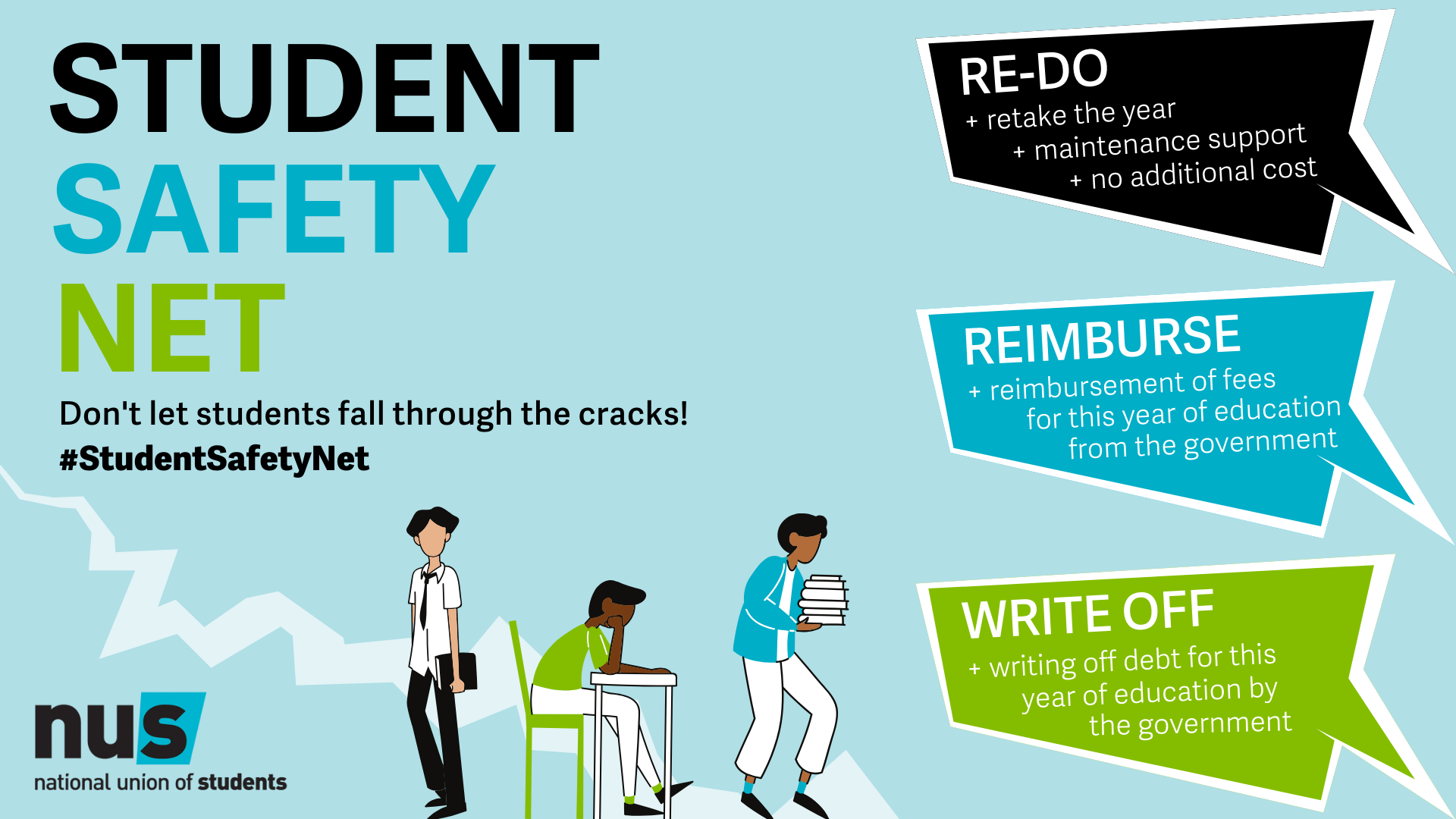 Working on this demand

Half an hour: join up with other SU campaigns

There are two campaigns run independently of NUS which echo the demands of Student Safety Net – if they are relevant to your members, get in touch and offer support!

Pause or Pay is a campaign that has come from arts institutions across the UK, arguing for workshop access when it is safe to do so, a physical degree show for 2020 graduates or appropriate compensation. They would like to grow the campaign to encompass other students who require practical facilities access to complete their qualifications – if this is your membership, get involved!

An hour: win the argument in government

We know that many of you have got the backing of your local MPs for the campaign already, which is great news. Now, we need to move them into action on students’ behalf.

Write to your MP expressing the need for further funding from the Westminster government to realise the asks of this campaign. You can make the arguments to back up our demands using the Student Safety Net report. If you can write a joint letter with other SUs in your constituency, or with your Principals and Vice Chancellors, this is all the more powerful.

The action we need from MPs is:

We will be releasing an open letter draft for you and your Vice Chancellors and Principals to sign in the week beginning May 18th. As well as bringing people on board, this can be used to lobby Universities UK, the Association of Colleges, other national further education bodies and government to show that there is broad-based support for releasing funding before we next meet with the Universities Minister on June 1.

What comes next? The question of ‘adequate teaching’

One of the next steps of this campaign will be to build a picture of what adequate teaching looks like, in order to support students to identify where they have not received it. We want to approach this from a broad, principles base and will release our plans in the coming weeks.