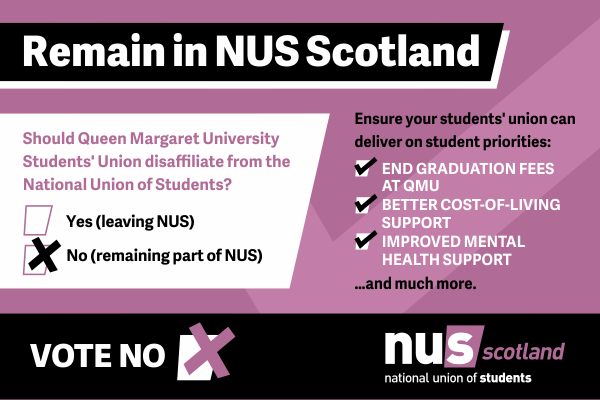 The question students will be asked to vote on is “Should Queen Margaret University Students’ Union disaffiliate from the National Union of Students?”.

We are asking QMU students to vote to remain part of NUS Scotland. Only by staying together  can we work to improve the lives of students at QMU Students’ Union, and across Scotland.

How can I help?

With a required turn-out of only 250 students, 126 votes could take QMU Students’ Union out of NUS Scotland – less than 2% of students could stop your union being part of the national voice for students in Scotland. Being a voter really matters – and every single vote really, really counts.

So, how can you help?

What has NUS Scotland done for QMU students?

Ensuring your voice is heard in parliament

We ensure students are represented at the Scottish Parliament at Westminster – NUS ensured the QMU President had the opportunity to quiz Scottish Government Minister’s at this year’s Presidents’ Roundtable.

NUS Scotland research found that students across the country are out-of-pocket because of graduation charges. At Queen Margaret University, students are charged £45 for graduation, with £42 charged for mandatory robe-hire.

This year alone we’ve supported students’ associations at Strathclyde, Aberdeen, Stirling and Robert Gordon to scrap graduation charges at their universities. We’d love QMU to be next. Read our open letter to all Principals, calling for all institutions to ensure it’s ‘Free to Graduate’ for Scotland’s students.

Following NUS Scotland’s ‘Budget for Better’ campaign, the Scottish Government committed to investing an additional £21 million in student support, which will benefit QMU students giving them more money in their pocket.

More higher education students now receive increased bursary support. The care experienced bursary is now up to £8,100. And from 2021, QMU graduates won't have to pay back student loans until they're earning £25,000 and over – up from £18,330 right now!

NUS Scotland, through its place on the review group, supported the Royal College of Nursing to lobby the government to increase the Scottish nursing and midwifery bursary to £10,000 from 2020/21.

Because of NUS Scotland lobbying efforts, QMU students will benefit from new counselling provision as part of a £20 million Scottish Government investment.

Following NUS Scotland campaigning, last autumn the Scottish Government announced a £20 million investment to recruit 80 new counsellors at universities and colleges over the next four years – including QMU.

We also successfully lobbied for a requirement that all institutions work with their students’ association to put in place a range of mental health support services for students. Read the Minister for Further Education, Higher Education, and Science ‘Letter of Guidance’ from last April, which sets this out.

And much, much more…

Fighting for students in the face of Brexit

NUS Scotland campaigned for a Remain vote during the EU referendum. While that wasn’t the outcome of the referendum across the UK, we’ve been campaigning to protect student priorities. Read more about our campaigning priorities – including certainty for EU students looking at study in the UK, ensuring international students have the ability to remain in Scotland after their studies, protection of student mobility schemes, a People’s Vote, and much more!

Students, and their students’ unions, working together across Scotland made these changes happen. Make sure QMU students are part of our future success.

If you’ve any questions, please get in touch.