NUS National Conference is about students from across the UK coming together to make change. It’s about students doing what we do best... leading the way and setting an example for the society we want to grow in, work in, live in and leave behind for students who come after us.

The recent general election demonstrated just how removed ordinary people feel from democratic decision making, how disconnected they feel today’s politics and politicians are from their daily lives. And sadly, NUS has been guilty of disconnecting students from its democracy, and student politics, but no more.

Democracy is precious and it is under threat, but we can do something about this. So this year NUS will take its biggest democratic step forward for half a century, as we reshape our democratic spaces to be truly student led, inclusive, accessible and participatory; to be a model for others to learn from and help shape the democracy we want to see in our society. This year NUS National Conference will be different and more than ever before, all about students.

We’re making a deliberate step towards a much more open and deliberative democracy with more students chairing, facilitating, discussing, questioning and debating; with more expansive exploration of the issues, going deeper into the top challenges facing students today; with more focus on impact, solutions and practical actions that could make a real difference; and with more opportunities to influence the shape of NUS, with time to talk face to face with NUS’ future leaders.

National Conference is also going to be a work in progress. Changes we make this year aren’t a one-off experience, change for us is about continuously evolving how we work, so every conference improves on the last, and every delegate leaves each event inspired about the year ahead.

At National Conference students discuss, deliberate and vote on issues that matter to them. What’s voted for at conference then becomes the policy of NUS UK which is then used by elected officers to build campaigns and make change happen.

Ideas for discussion topics come from students’ unions who then elect students to represent the views of their students at conference, debating the topics in more detail.

This year there will be many more opportunities for students attending conference to participate in democratic decision making. We believe that how we make decisions is as important as the decisions themselves. That’s why the conference is structured to allow for as much conversation and dialogue as possible so that every student that attends has their voice heard. So, conference is not just about making decisions. It’s about hearing from a variety of voices and using the conference to kick start campaigns. 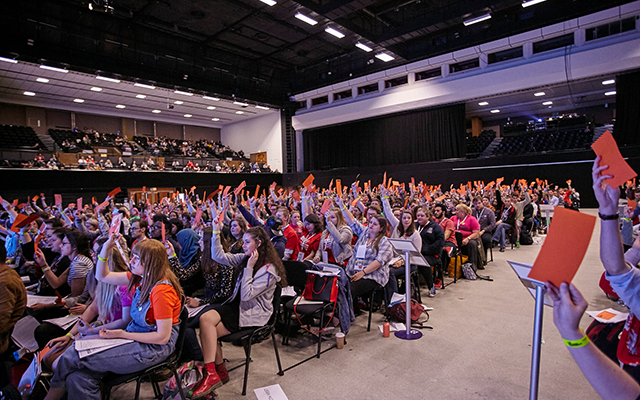 These officers are elected for two years to take forward the policies set by conference and turn them into campaigns. They create the NUS UK Plan for Action which spells out exactly what NUS is working and campaigning on.

We select these officers through elections, which take place online, opening two weeks before conference. Students then get to hear about the candidates running for each position, ask questions and interact with them and cast their votes.

NUS is more than a collection of policies and officers. It’s a movement for change. We believe that students have the power to influence and make massive changes to our society. Our conferences and democratic spaces should not be standalone events, they should be the springboard for future action.

We know that students attending National Conference will be in a variety of different stages in their study. Some will be midway through their courses, some will have just been elected as officers in their unions for the next year and some will be coming to the end of their studies/sabb role. Conference will be an opportunity to speak to incoming officers and to network with peers, creating the links that will lead to campaign teams and officer support. Once policy is set and leaders elected there will be further opportunities to get involved in the work going forward.

There will also be opportunities to support the effective running of our democracy going forward. This will include scrutiny of our officers either by signing up to campaign accountability surgeries or standing for a position on the National Scrutiny Council. It also involves shaping the future of NUS conferences. This includes follow up and feedback on the event and generating ideas for future years, as well as the chance to run for our Democratic Procedures Committee to implement a free and fair democracy in future years. Read more about elected democratic support roles here.