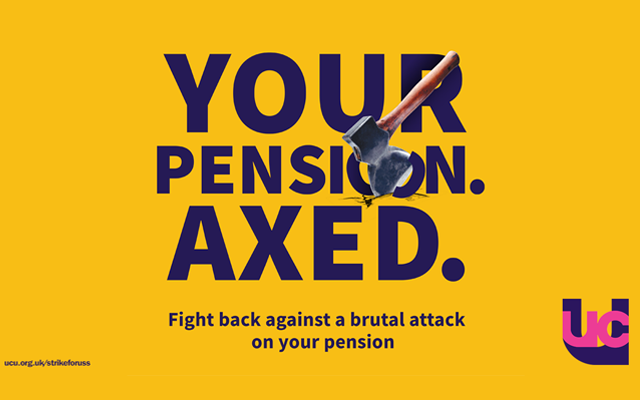 What is going on?

The University and College Union (UCU), the trade union representing academic staff in Further and Higher Education, has announced industrial action over the future of the Universities Superannuation Scheme (USS) after negotiations ended without an agreement between representatives from UCU and Universities UK (UUK).

Why is the strike taking place?

The dispute is over proposed changes to the USS scheme. USS is the main pension scheme for academic and related staff in the pre-92 institutions and, since its foundation, has provided a decent income in retirement for hundreds of thousands of people. In a sector where many would earn more working in the private sector, the USS pension has provided compensation for relatively modest salaries and has acted as a magnet for talented overseas staff. First Actuarial estimates that a typical lecturer will receive £208,000 less under the proposals than presently.

In a ballot, on the proposals, 88% of UCU members voted in favour of strike action.

When will it happen?

The strike will one of the largest ever strikes of academic staff on UK campuses. Strikes will begin on the 22nd February 2018. 61 Universities will be taking part in the action over a four-week period that will begin with a five-day walkout either side of a weekend. There will then be four days of strikes from Monday 5 - Thursday 8 March and a full five-day walkout the following week (12 - 16 March).

Note: Due to their academic calendar four universities - King's, Queen Mary, Edinburgh and Stirling - will not take action in week one. They will start their action in week two on Monday 26 February. They will then walk out for two days on Monday 19 and Tuesday 20 March.

What is NUS’ position?

We believe that fairly rewarded staff are the cornerstone of the university experience and that the proposal by Universities UK to substantially cut the pensions of members of the USS pension scheme will be hugely damaging if implemented.

We stand in full solidarity with UCU throughout this dispute, and are calling on university negotiators to return to the table. See the joint UCU/NUS statement.

What can students’ unions do?

We will be encouraging students’ unions to take part in solidarity actions in support of the strike. We are asking you to:

Will NUS be providing resources?

NUS has released a campaigns guide for unions, posters, leaflets, and digital resources. You can find them at the USS pensions dispute campaigns hub.

It is important that your first step is to make contact with your local UCU representatives to discuss their plans for the strike. You can find the contact details for your representative here.

What can students’ unions do or not do as per charity law?

Well paid, well-supported academics are integral to the student experience – it is therefore in the student interest that academic staff are treated fairly.

If there are concerns about the legalities of any course of action, NUS recommends that legal advice is sought and we refer you to the attached on campaigning as a good place to start. Read more about it here: Guidance on Political Activity

Some students may be concerned that missing key parts of their course will affect their assessment. What will recourse is available to those students?

We are asking students to complain to their institution head if they believe their learning has been disrupted by the strike, urging universities to seek to re-enter negotiations with UCU. UCU have created this online tool for students to write letters to their vice-chancellor, it may also be useful for unions’ to prepare guidance for students submitting these complaints.

Students’ unions should expect a likely increase in students seeking to submit academic appeals/complaints as a result of the strike. It may be worth preparing guidance for students based on your institution’s appeals and complaints procedures. In particular, students should be prepared to log and evidence any disruption as a possible mitigating circumstance for assessment. In some instances, aspects of the industrial action may not be accepted as mitigating circumstances. Unions may wish to identify these circumstances ahead of the industrial action, and secure the strongest protections possible for their members under these circumstances.

What about postgraduate students currently on graduate teaching contracts?

Some postgraduate students are also on teaching contracts, and will often carry status as both a student and a member of academic staff. Graduate teaching contracts are usually not part of USS, and are therefore not part of this dispute. Postgraduate students who wish to act in solidarity with colleagues during this dispute should, in the first instance, seek guidance from their UCU representatives.

For postgraduate teachers not currently members of UCU, membership is available for free throughout the duration of their studies. You can find more details here.

We are also providing resources and guidance for students' unions to campaign in support of UCU. See our Campaign Hub for more.