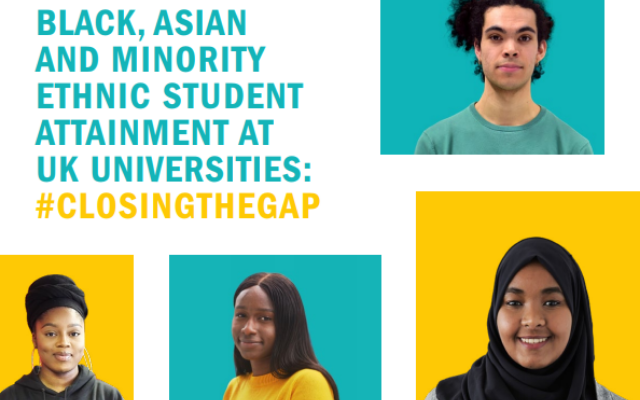 National Union of Students (NUS) and Universities UK (UUK) launch a report into how universities must demonstrate their commitment to university-wide change as they seek to eliminate the black, Asian and minority ethnic (BAME) student attainment gap in UK higher education.

Led by Baroness Valerie Amos, Director of SOAS, and Amatey Doku, Vice President for Higher Education at NUS, UUK and NUS have been working with universities and students since June 2018 to tackle the disparity between the proportion of ‘top degrees’ (first or a 2:1 degree) achieved by white and BAME students.

Today’s publication of the report - Black, Asian and minority ethnic student attainment at UK universities: #ClosingtheGap - follows contributions from 99 universities and student unions and six regional roundtable evidence sessions with 160 attendees on how the attainment gap should be tackled. These five steps for universities to improve BAME student outcomes have been identified:

You can read more about each of these steps in the full press release.

“It has been a pleasure to work with Baroness Valerie Amos and the team at UUK to deliver this report. Universities have presided over significant gaps in attainment between BME students and white students for far too long and I’m delighted that the sector has come together to chart a way forward.

“From decolonising the curriculum to more culturally competent support services, many students and students’ unions have been fighting and campaigning for action in this area for years and this report highlights good practice, and clear practical steps for universities to take to begin to respond to many of the concerns raised.

“Over the next coming months we’ll be championing its release and ensuring the report is taken seriously by all senior leaders in the higher education sector, so we can start to make proactive steps to eradicate these unjust gaps in attainment once and for all.”

While there was an increase of more than 50% in the number of BAME full-time undergraduates in the UK between 2007 and 2017, 71% of Asian students who graduated in 2017 achieved a first or a 2:1, and just 57% of black students compared to 81% of white students. Data shows that qualifications before attending university, although a key factor in degree outcomes, do not explain the differences between ethnic groups.

Universities UK is asking vice-chancellors and principals to sign up to pledge to work with students and use the report’s recommendations within their institutions. Progress made by the sector will be evaluated in 2020.

You can read the full report here.