Michael Kind, Development Officer at Sheffield Students’ Union’s, blogs about the actions taking place on his campus to boycott Barclay’s for their role in the climate crisis. 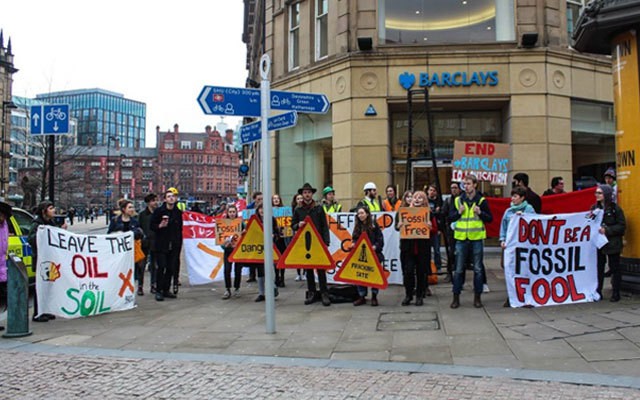 I’m launching a campaign for our students’ union to boycott Barclays.

Why? Because Barclays are complicit in funding the climate crisis both locally and globally.

You’ve probably heard about fracking right? An essential part of the government’s energy strategy that essentially has no benefit in tackling climate change and poses “substantial risks” to human health.

Barclays own 97 per cent of Third Energy, the company with the first drilling license in the UK - in North Yorkshire.

On a global scale they fund fossil fuel extraction projects. A 2014 report found that Barclays had invested £15.6 billion into the fossil fuel industry. Notably, Barclays has recently funded coal extraction in Colombia, and tar sands extraction in Canada - both resources widely considered at odds with any attempt to tackle the climate crisis.

Doing this is massively important in the context of a students’ union. In Sheffield we are “committed to creating a fairer and liberated society,” and at a national level the NUS has a number of committed liberation campaigns. The climate crisis exacerbates gendered and racialized forms of oppression in particular - with the majority of those facing the most adverse effects women and people of colour. As an example, the Barclays-funded coal mine in Colombia has clear neo-colonial overtones.

This is a clear moral imperative to respond to the climate crisis.

This week is a national week of action against Barclays for these reasons, with a student-organised protest happening in Sheffield on Saturday, and a craftivism on Friday evening. There’ll definitely be something going on where you are so keep a look out! Barclays are increasingly becoming a target for those fighting the climate crisis in the UK - and Students’ Unions need to be a part of this! By publicly separating ourselves from Barclays we start to challenge their social power to operate in the way they do.

If you’ve got doubts about this as a process then read into the mass boycott of Barclays by SU’s for funding apartheid in the 70s and 80s and the successful effect that had. If anything it’s all the more reason to ban them - something clearly hasn’t changed…

Other SU’s - get on board too! This will be far more successful if lots of us get involved. If you’re a student then set up your own campaign to lobby your SU, or if you’re an officer then set the wheels in motion!