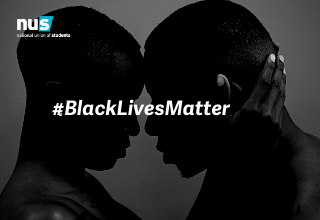 ​
The murder of George Floyd was a result of inhumane police brutality that is perpetuated by a systemic racism and white supremacy. Yet what happened to George Floyd is not an individual instance. It is a consequence of a racist system and society that puts Black people in closer proximity to harm, violence, and death than any other demographic in the United States, UK and globally.

Collective action to challenge these unjust systems of oppression is essential, whether protesting in the streets or challenging racism in their homes, education institutions or workplaces.

However, we cannot condemn these issues as a uniquely American problem. In the UK, we have our own history of racism, police brutality and death under police custody. NUS stands in solidarity with those protesting in the UK not only for justice in the United States but for justice for those who have died as a result of police violence here, such as Nuno Cardoso, Edson Da Costa, Sarah Reed or Mark Duggan.

And police violence is just one facet of wider problems in our society. Racial disparities feature in education, housing, health, employment and more. When discussing the deaths of Black people, we must also talk about the ways in which their lives are affected by institutions perpetuating racism. For example, we know that Black people are up to four times more likely to die of Coronavirus. Black people in the UK have a lower life expectancy than white people. Black men are three and half times more likely to be arrested than white men.

The work to address these disparities is vast, but NUS is committed to doing everything we can to achieve racial justice, to be anti-racist not just in name but in practice. This is why, working with students’ unions and trade unions, we campaign to decolonise further and higher education, to challenge the Prevent duty, to demand that universities and colleges do more to tackle hate crime and hate incidents and much more.

This work starts with the unions we work with and represent. We want to address the statements that universities have released in support of Black Lives Matter but have not committed to any action to protect their Black students and staff against racism - UK universities must do better. Our educational structures and institutions are a product of colonialism. This is reflected in the racist barriers and structures students face, which manifests as Black students being 3 times more likely to drop out that their white counterparts, there being up to a 26-percentage point gap in attainment of first or 2:1 degrees between Black students and their white counterparts. Black students and staff not having access support for targeted mental health support, denying funding to Black students, silencing Black scholars, and not challenging and changing the reality of there being only 27 professors in the UK who are Black women to name some examples.

"Universities must be held accountable and take action by going beyond empty platitudes and working towards a vision of a truly liberated education system, one where decolonisation is embedded in the framework of the university, creating a space in which all students, regardless of their background, can access and thrive. This action looks like contributing funds, resources and support for organisations and spaces built for and by Black students."

Examples of this include: The Free Black University (for universities), Fill in the Blanks (for colleges) and The Black Curriculum.

“Students, students’ unions and NUS have played a crucial role in social justice movements over the decades, and we must play our part in achieving justice today. We honour the Black activists – both students and staff – who have come before us, battled to be heard, won fights in the face of white supremacy and racism, and brought us to this point. In the immediate days and weeks, we must tend to the welfare of our Black activists, officers and staff who are exhausted by racism day in day out. The uprising in the last few days hasn’t come from nowhere. It’s the result of decades of organising and political labour by Black people, often working in environments that minoritise and oppress them – including and sometimes especially in our own colleges, universities, students’ unions and in NUS.”

So what do we do next? WE. KEEP. GOING. We turn it up. We actively make space for racial justice. We don’t leave this work to Black students and staff – ending racism and white supremacy is all of our responsibilities. We put racial justice at the top of our strategies and comms platforms and campaign plans. We don’t stop. We do the work in our own house – in colleges, unis, students’ unions and NUS. We use our platforms to force change in society and government. White folks do the work of unlearning white supremacy. We raise up and elevate the voices of Black students and staff. Black students to the front.

Know your rights - A guide for protesters

Practical ways to support BLM from the UK

About NUS UK
The National Union of Students (NUS) is a confederation of 600 student’s unions across England, Scotland, Northern Ireland and Wales. Through our members we represent, campaign on behalf of and support the interests of more than seven million students.

Working with more than 95 per cent of all higher and further education students’ unions across the UK our main purpose is to defend, promote and extend the rights of students to make a real difference to their educational experience. Our goal is a country where everyone can access and thrive in education regardless of their background, and a society where students are valued as active citizens.

As education policy is devolved in the UK, we deliver our democratic and student voice activities through NUS UK and our nation-based teams in NUS Scotland, NUS Wales and NUS-USI.

Through our teams in NUS Services and NUS Charity we help member students’ unions develop and build effective students’ unions for all learners. Working with commercial partners, such as Endsleigh and OneVoice, we ensure students’ money is reinvested back in the student movement. Our charity partner SOS UK delivers our award-winning sustainability campaigns, including Green Impact, Student Switch Off and Divert-Invest. www.nus.org.uk