No Police in Pride; No Pride in the Police

NUS LGBT+ and NUS Trans Campaigns respond to the arrest of three NUS activists at Glasgow Pride on Saturday. 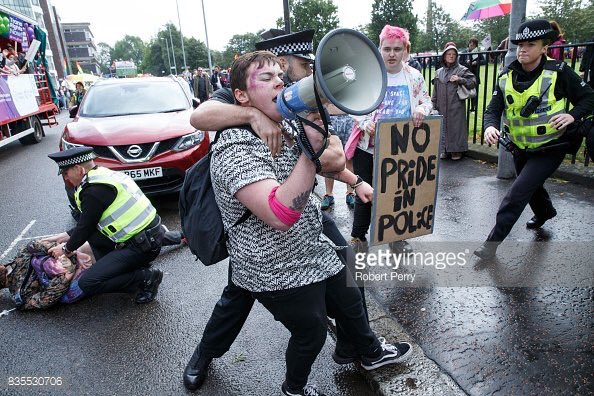 On Saturday 19 August three NUS activists, Beth Douglas (NUS LGBT+ Officer, Women’s Place), Jess Bradley (NUS Trans Officer) and Rob (from NUS Trans Committee) were arrested at Glasgow Pride for their part in a protest highlighting police violence. That same day, two antifascist parade-goers were also arrested for holding a sign saying “these f*ggots fight fascists”. The NUS LGBT+ Campaign and NUS Trans Campaign would like to extend their solidarity to all five people who were arrested at Glasgow Pride.

This year, the Glasgow Pride parade had a police marching band as its frontrunner bloc. Given the police’s role in disproportionately policing and arresting trans and LGBT+ people, and the history of Pride as a protest against police violence instigated by trans women of colour, we feel that the decision by Glasgow Pride organisers to give the police this position of honour is misguided.

The protest against police brutality was a peaceable attempt by a small group of activists to highlight police violence by extending a banner in front of the marching band. They were almost immediately pushed aside by uniformed officers who used excessive force: one activist was reportedly choked and another informed they were wrestled to the ground and inappropriately restrained. The three activists were arrested and detained in police custody for several hours.

The anti-fascists who were arrested at the march were arrested for carrying a sign that said “these f*ggots fight fascism”, on the grounds that the word ‘f*ggot’ was a homophobic slur. Given that many signs at the parade also used reclaimed slurs with no problems, it is clear that these arrests were a deliberate and malicious attempt to undermine queer anti-fascist organising by both Glasgow Pride stewards and the police. At a time where the far right are on the rise, both within the UK and internationally, we find this move concerning.

We would like to explicitly condemn the actions of the police at Glasgow Pride and call for them to drop all charges against the five people arrested. We call upon them to publicly apologise for their excessive use of force and likely unlawful arrests, and to provide appropriate compensation to the activists affected by their actions.

We would also like to call upon Glasgow Pride organisers to ensure that their stewards understand the importance of anti-fascist organising to the safety and wellbeing of the trans and LGBT+ communities, and for them to apologise publicly for their complicity in the arrests of the two anti-fascist activists. We would also like to ask them to join us in condemning the inappropriate and damaging behaviour of the police, and to publicly reassure us that the police will not be invited to march as part of the parade in future years.