Rob Simkins outlines his priorities as NUS Wales President in article for the Institute of Welsh Affairs. 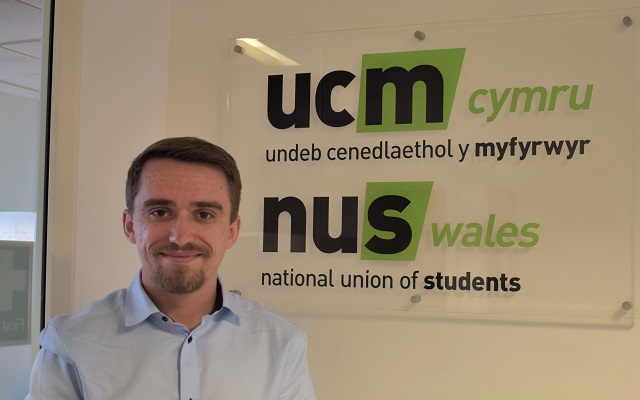 The President of the National Union of Students in Wales has started his tenure by outlining his vision of an education system where students are treated as partners, rather than consumers.

Writing for the Institute of Welsh Affairs, Rob Simkins said upcoming legislation to reform the post-16 education landscape in Wales provides a “once-in-a-generation opportunity” to embed student partnership as a core principle within education.

NUS Wales has consistently made the case for the Welsh Government to make fully funded, sustainable and autonomous student representative bodies a legal requirement in all post-16 education providers.

In the IWA article, which focused on his priorities for the year ahead, Rob said:

“As recipients of public money, our universities, as well as colleges, should be committed to treating their students as partners in the education they receive, and not merely as consumers.

“Facilitating the development of students’ unions and student voice structures at a local level is a key part of the work of the National Union of Students. The upcoming reforms to the post-16 sector represent a once-in-a-generation opportunity to embed student voice as a core principle across the sector.”

On mental health and well-being, he said:

“Through strong campaigning with students’ unions and partnership work with the sector, NUS Wales helped secure a government funding package of £2.3 million for Welsh universities to invest in their mental health and well-being services this year.

“I want to see this investment continue beyond one year, and I want to see our universities work together with students’ unions as they bid for this funding. We must all ensure services deliver long-term change, not short-term headlines.”

On Brexit, he said:

“Like most students, I believe that Wales is better off in in the EU. That’s why I’m making the case for a people’s vote on the final Brexit deal, whatever that may be.

“A people’s vote is the only realistic way to solve the parliamentary impasse without risking the UK crashing out of the EU in a disastrous no-deal Brexit.

“Regardless of EU membership, it’s imperative that we retain access to ERASMUS+. The benefits of studying abroad are numerous and Wales’ students would be worse off if they didn’t have the opportunity to participate in the scheme.”

On student housing, he said:

“The Welsh Government has done the right thing by abolishing letting agency fees through its Renting Homes Act. However, there is plenty of work to be done around raising students’ awareness of their rights when renting.

“I will lobby the government to give teeth to its Rent Smart Wales scheme so it can properly clamp down on rogue landlords. I also want to work with students’ unions to develop their advice on renting to make sure it is consistent and up to date in every union, and will be looking to work with experts in this area. Lasting change is built through partnership.”