Jules Mason tells us why he ❤️'s National Conference

NUS UK’s Chief Returning Officer, Jules Mason tells us about his role and shares what he enjoys most about the festival of democracy that is National Conference. 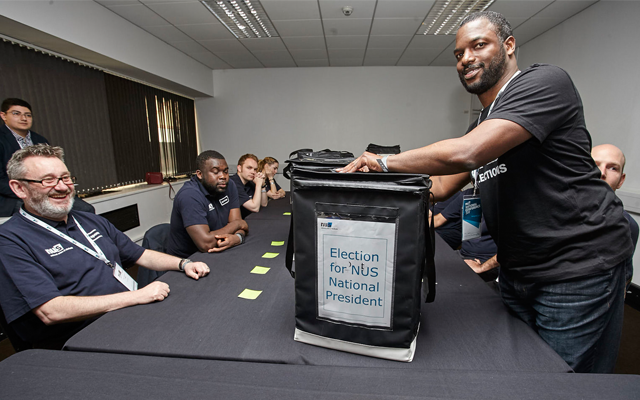 ⏰“Time, candidate, time!” ⏰ - a phrase akin to Marmite. By the end of National Conference 2019 you’ll either love it or hate it. Personally, I love it!

I’m Jules Mason aka ‘Jules the Rules’, your friendly Chief Returning Officer. I’m a volunteer, appointed by National Conference every two years, to oversee the running of all NUS UK, Liberation, Nations and Sections elections. I’m supported by three Deputy Returning Officers – Estelle, Kathy, and Rhodri, who are also volunteers.

As your Chief Returning Officer, my three objectives are to ensure: contested elections; accessible elections and an effective elections committee.

Having been asked ‘what it is I love about National Conference?’, it won’t surprise you to hear that it's the excitement, energy and creativity on display during the elections.

From the slogans, stickers and t-shirts, to hustings sound-bites, election stunts and hordes of candidates’ supporters encouraging delegates to vote for one candidate or another, I love the buzz that’s generated when delegates cast their vote to decide who they want to lead their National Union.

I also love to see the varied emotions in candidates’ faces just before they tentatively take to the stage, approach the rostrum, and launch into a passionate speech as to why they deserve your vote.

So to everyone attending Glasgow next week, candidates and non-candidates, be nice to each other, love the experience, treat each other with respect and don’t spoil conference for anyone with unruly behaviour.

Me and my team, along with Democratic Procedures Committee and NUS staff, will do all we can to ensure that all aspects of National Conference, not just the elections, are safe, fair and accessible for everyone.

So next week in Glasgow, yes display your support for who you want to get elected but also respect all candidates. Otherwise, it may be 'time, delegate, time' on your participation at National Conference.