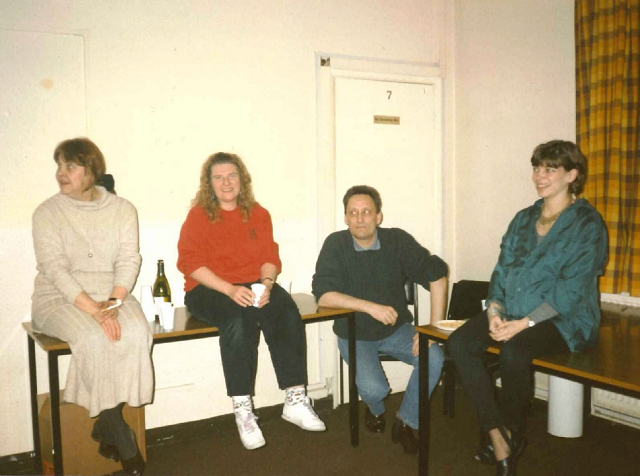 My friend John Offord has passed away; he was a constant in my uncertain life for twenty-five years.I met him on a sunny lunchtime in a pub in St Albans after an FE regional network at Oaklands College had adjourned on the pretext of a poor turnout. He greeted me like he had known me for years and preceded to draw me into his world of heroes and villains.

John was a performer. You would always find him on his stage (the nearest available smoking area) jacket sleeves rolled up with vodka/fag in hand, glasses perched at the tip of his nose and backpack hanging off one shoulder. His story would lance his chosen pantomime baddie (normally a finance director or an Essex college principal) with his razor-sharp wit, but then somehow bring the story round to a piece of Pat Ainley research.

The stories always had a purpose; to benefit his friends, colleagues and his charges.

John was a regular fixture on the branch committee of ACTSS, which brought him into regular “dialogue” with NUS management. It also meant that he was occasionally the ACTSS rep on recruitment panels in the days of the closed shop, looking sternly at prospective candidates, his sole question whether or not they would join the union if they were the successful candidate!

But more than most he knew the power of collective action. John appreciated that NUS was a lifeline to the 4 million learners across England who very often had only nominal students’ unions to protect them. Some hapless college would give a breezy brush off to a student complaint and when it would get back to John at Camden/Holloway Road a broad “make my day punk” smile would spread across John’s face. He had the ear of the funding councils in FE and could get through to the top brass with ease.

John would dispatch Vice Presidents and Area Convenors across England to investigate people’s stories of corruption, bullying and incompetence.  The funding council of the time would ‘execute’ a senior manager, fire a principal or merge (close) a college on the testimony he gave. It was his regret that we traded influence for discretion with the funding councils and when they come to write the history of the FE sector the full impact of John’s casework will only be known to the people who knew him.

More known was his national work. It’s no understatement to say John’s learner voice agenda changed post-sixteen education in England. John championed the student agenda through charters, complaint procedures, learner involvement strategies and the learner voice agenda which has had a massive impact on the sector. John ensured that students got representation back on college corporations after incorporation, even growing the possible numbers to three. The learner involvement strategies and student governor requirements were enshrined in the Further Education and Training Act in 2007, shortly before John left NUS, and was a culmination of his work over a number of years. John played a central role in helping NUS leverage the passage of the FE Bill to make the case and create these wins. These few months of work were a final push in John’s relentless efforts, and wouldn’t have been possible without the relationships and respect for NUS that John had cultivated in the FE sector over many years.

John was also years ahead of the zeitgeist with his briefing “safe on campus” raising concerns about extremism in an intelligent and thoughtful way.

His agenda spread into higher education and contributed to the work that resulted in the National Student Survey. After leaving NUS, he continued his work in UCU deploying his razor-sharp analysis in the FE/HE area.

He was the rarest of policymakers in that he had a national impact, but he knew the individual people whose lives would be changed because of subsequent policy changes. John would weave a story and a narrative around the student testimony to achieve change for the better. For years I thought this was the only way research was conducted.

The impact on who he called his friends was much bigger.

After a week on the road as Vice President, I (and many others) would wash up for a lost weekend at John’s house. One of the famous therapeutic curries followed by a load of vodka ensured Friday nights last long into Saturday and occasionally into Sunday.

In NUS, it’s not just the ends that count but the means – supporting and empowering student leaders to achieve change is part of the bread and butter, and John was one of the best at doing so. John treated student officers with a respect and comradery that meant officers 35 years younger than him had no hesitation in calling him both a mentor and genuine friend. He combined high expectations and honesty with unflinching support, always knowing when to challenge, nudge, encourage or just make you laugh. He would test and expand your thinking with his gift of storytelling, vast knowledge and humor - he enjoyed long conversations, was eager to hear your opinion and encouraged debate. John would take great pleasure in watching officers defy the expectations of senior sector leaders minded towards patronising students – the plotting beforehand and de-briefing afterwards (usually in a corner of a dingy conspiratorial pub with a pint of strong European lager!) were always the highlights of sector engagements.

I know the same dynamic applied with the many young staff members NUS recruits at the beginning of their careers, who John treated with kindness and courtesy, patiently explaining arcane details of FE policy – via numerous references to theatre, literature, and philosophy – and supporting them in developing their skills and knowledge.

We were all sucked into John’s life as colleagues, friends, and lodgers.

He made us welcome in his family.  He was a generous and open-hearted man.

I will miss John a lot. We are all the poorer for his passing, but much richer for being part of his life.