Sexual and Gender Acceptance (SAGA) is a group at Forth Valley College dedicated to supporting LGBT+ students, and providing a space to plan LGBT+ activism. The society aims to support LGBT+ students and raise the profile of LGBT+ issues in the college, while helping educate others about the dangers of homophobic and transphobic attitudes. 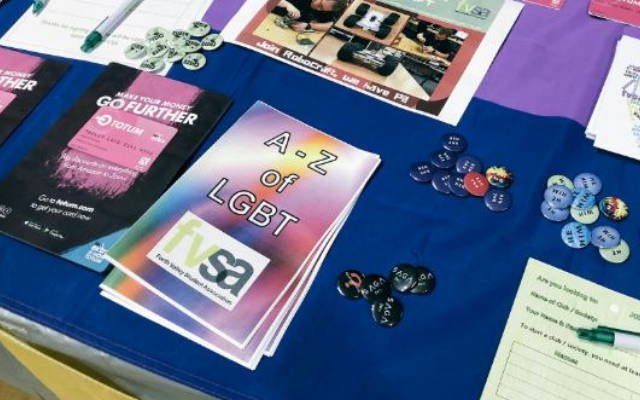 SAGA has taken a leading role in making sure that Liberation is at the heart of FVSA’s Student Partnership Agreement, and hasn’t shied away from tackling issues at the college head on.

Following an incident in which a staff member had been unwilling to use a student’s preferred pronouns, SAGA took the opportunity to educate all of the college community. They designed and produced pronoun badges to act as conversation starters and help normalise their use. SAGA also worked with the college to produce a Trans guide which was reflective of Trans students, and to review a plan for staff to support students who are transitioning.

SAGA has also sought to address the geographical difficulties that LGBT+ students at Forth Valley can face. Shannon Easton, who was previously Forth Valley’s LGBT+ officer, explained:

“Sometimes, due to their rural location, people who self-define as LGBT might not have the opportunity to access support services from the larger cities. Being located in the Forth Valley area, there are limited options with regards to attending LGBT+ pride events, as large events tend to be held in Edinburgh and Glasgow. So SAGA organised a group outing to take part in the Edinburgh pride march as it was a free event and even liaised with organisers and FVSA Disabled Students Officer to offer students places on the Edinburgh Pride Bus that might face accessibility issues.”

While only in its second year, SAGA has also worked hard to build partnerships with other groups, collaborating with other college clubs and societies to ensure they are LGBT+ welcoming spaces. Most recently, they worked with college group Knitters Anonymous to produce crafts that were sold to raise funds for LGBT+ Youth Scotland during LGBT+ history month. And two of the society’s officers also went on to take a role in NUS Scotland’s national LGBT+ students campaign: Shannon as a member of the LGBT+ committee, and Liam Slaven as part of the LGBT+ Procedures Committee.