On Friday 14 October the Chief Returning Officer (CRO) announced that a request for a National Ballot had been received and accepted.

The consulation on the question to be put to the membership has now closed. The Chief Returning Officer (CRO) has had a chance to review the submissions and has made the decision that there will be no changes to the original question.

The CRO has confirmed the following question to be put to your members:

Should NUS conduct and publish a risk assessment and equality impact assessment before finalising the NSS boycott / sabotage action?

The question has been decided based upon the content of the motion submitted by UWLSU and aims to be clear and balanced, in line with the main concerns of the motion and the rules associated with a national ballot. 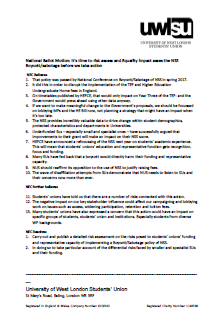 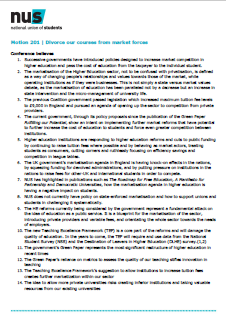 Section 1100 of NUS’ Articles outline the rules associated with a National Ballot.

Unions must read and understand the rules and what is expected of them before putting the question to thier membership.

If you have any questions about this process and these rules please get in touch with us at governanceteam@nus.org.uk. 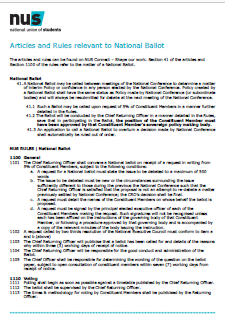 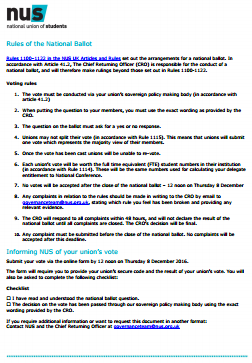 Before going out to your membership you should read all these documents above and ensure you understand and have met the requirements outlined in these rules. Failure to complete your vote in line with the rules could result in your union's vote being discounted.

Voting closes on Thursday 8 December 2016 at 12noon. Unions must submit their vote by this deadline or it will not be counted.