Celebrating the amazing work of student societies all across the UK 🏆

On Wednesday, the great and the good from societies all across the UK descended on Cardiff University Students’ Union for the third annual National Societies Awards, celebrating their achievements during the past year. Here’s what went down on the night… 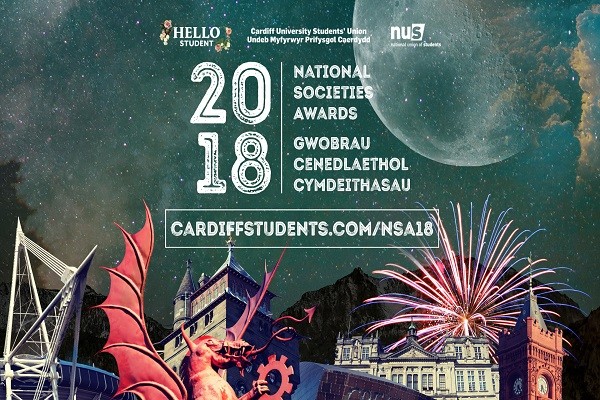 For the first time, the National Societies Awards came to Wales for an evening full of entertainment and celebration, as students’ unions from Bangor to Bristol, from Stirling to Swansea, and everywhere in between recognised the amazing work of societies all across the UK.

Cardiff won an online vote, in which over 70 students’ unions took part, to host this year’s awards, after previously being held in Nottingham (2017) and UWE (2016).

The evening began with a welcome from Cardiff’s VP Societies Lamorna Hooker at the Great Hall of Cardiff’s students’ union, where we were also treated to a spot of pre-dinner traditional dancing by Cardiff’s Bulgarian Society!

After dinner, it was on to the awards. More than 600 nominations were submitted, so the judges had a hard job whittling them down to a shortlist of just 93 across 13 award categories. But they did! And here’s who won big on the night...

And here's what the winners had to say...

The National Societies Awards are just one evening of saying ‘thank you’ to the students who run societies all across the UK, but truly, what you all do day in day out is pretty amazing.

Thank you and congratulations to the wonderful hosts of the National Societies Awards 2018 – Cardiff University Students’ Union.

P.S. If you want your students’ union to be in with a chance of hosting the National Societies Awards 2019, follow @NationalSocieties on Twitter to keep up to date with how to be in the running!