Last week, the European Students’ Convention was held in Wales for the first time. Our Deputy President Carmen Smith looks back at a successful week. 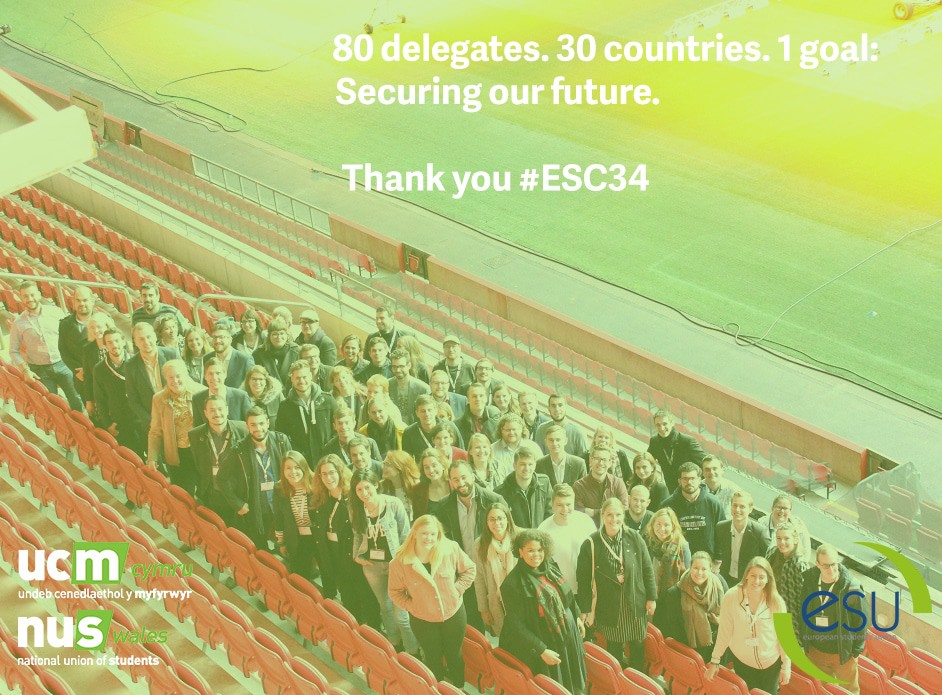 From discussions on Brexit and Bologna, to learning Swedish folk songs and y Twmpath. Just a taste of what made the 34th European Students’ Convention a massive success.

It was an absolute honour to welcome over 80 delegates to the Principality Stadium last week as NUS Wales hosted the bi-annual convention for the very first time. The chance to bring together such an inspiring group of student leaders from across Europe with a variety of experiences and ideas was a privilege. We all had one goal in mind: securing a better and more prosperous future for students in Europe.

The European Students’ Union is an organisation that NUS UK are proud to be members of and I was happy to open the conference with a speech that highlighted the need for a strong and cooperative partnership between student representatives across Europe.

75% of 18-24 year olds voted to remain in the EU and I was keen to stress during my opening speech how open and tolerant we continue to strive to be in Wales. We, as NUS Wales, continually work in support of the European Students’ Union’s mission to represent, defend and strengthen students’ educational, democratic, political and social rights.

This is why the theme for the convention, ‘Securing our future’ was so important and why, given the current climate surrounding Brexit, we were so thankful to get the opportunity to host the event in Cardiff.

One of my favourite sessions at the convention was the debate on the ramifications of leaving the EU. Chaired brilliantly by NUS UK’s very own Amatey Doku, I sat on the panel with Felix Millbank, President of Students for the EU and Llyr Powell, leave campaigner and Co-director of the Centre for Welsh Studies. This was a very lively debate and I’d like to thank Felix and Llyr for giving up their time to attend the debate.

We, as progressive, open and tolerant Europeans often fall into the trap of the echo chamber, where we surround ourselves with like-minded individuals who see the world the same way as we do. In fact, some delegates stated that this was the first time they had met a leave campaigner and were intrigued by the opportunity to listen to their views. This definitely improved the understanding by the delegates of how Brexit negotiations are being shaped in such a complex way in the UK.

As student leader’s we must at times be open for debate with those who share different views, listen to their concerns and be prepared to actively disagree. Through this, we can continue to argue passionately for a tolerant and progressive country in a more effective and open way. I definitely learnt from this experience and look forward to many more debates over the coming year.

The Cabinet Secretary for Education Kirsty Williams’ keynote speech was also a personal highlight. Kirsty spoke passionately about the need for more women to stand up and take an active role in governance. Her personal journey really resonated positively with the room and inspired many women student leaders in the room. She also thanked NUS Wales for our hard work in representing all students, from all backgrounds in both Higher and Further Education.

It was great to hear Kirsty Williams offer a vision for a more progressive and cooperative nation moving forward. It’s essential that politicians work to deliver a future that embodies the ideals of young people.

There has never been a more pivotal time to shape a country where young people are able to access and succeed in education, communities and civic life regardless of their background.

We will always be a loud and critical voice in Wales – but will always be there to talk, to listen and to ensure that the Welsh Government understands the needs and the wants of students’ in Wales.

This is what NUS Wales is passionate about, and this is why we’re pushing the Welsh Government to fight for the right to move freely across the EU without facing economic or physical barriers. We want to challenge the negative perceptions of international students and workers which has resulted in shocking levels of hate crime post-Brexit. We want to see freedom of movement for students and academics protected and a continuation of involvement in the ERASMUS scheme.

Of course, It wasn’t all speeches and debates – we also had a lot of fun!

The evenings brought an opportunity to relax and get to know each other better as we enjoyed both intercultural and welsh cultural evenings.

The intercultural evening brought the best of Europe into one room as delegates brought a selection of food and drink from their homelands. The French brought wine and cheese, the English brought Gin and mince pies, we brought Penderyn Whiskey and Welsh cakes and the Finnish brought the minty favourite Minttu. A nasty hangover ensued!

The Welsh evening was an opportunity to give our delegates a taste of the history and the culture of Wales. An evening of the traditional ‘Twmpath’ (welsh folk dance) got everyone on their feet and dancing into the early hours of the morning. A new experience for many!

Spending last week with the delegates gave me a real sense of optimism moving forward. I’m sure you’ll agree we live in a very turbulent time. From Brexit to Trump and from the AFD to the Front National - the rise of the far right coupled with dramatic decisions being made will affect the futures of so many young people.

But while our National Students’ Unions and ESU continues to exist – we will always fight to put equality, tolerance and inclusiveness at the heart of our movements and our nations.

I’d like to personally thank all the delegates and guest speakers who ensured that #ESC34 was such a massive success. We’ve all taken different experiences and ideas out of the event, but I believe that by working together we can secure our future.